For over two decades, Dimitra Alexakis grew from a casual sales assistant, to a manager of tax free and gift stores; in both the International and Domestic Terminals, at Sydney Airport.  Dimitra was an asset, a committed employee, with exemplary business qualities including a strong and trustworthy work ethic.   Dimitra is passionate- warm and engaging, and has a passion and love to help and serve people.  She possesses excellent customer service skills, and Dimitra has over 10 years experience in the hairdressing industry.  Her invaluable culmination of skills and knowledge gained, has greatly contributed to her success in serving customers within her new role, at Acropolis Funeral Services.

Then suddenly- the unthinkable happened.  Death would greatly impact Dimitra and her family beyond words can explain.  Unexpected changes that death brings, would lead to mind shifts, lead to regrouping of ones thoughts- processing the reality of a future without the loving presence of a loved one.  Changes that greatly impact Dimitra, with the loss of her father.  Changes however that would bring many things into perspective, including a sea change regarding a career change for Dimitra- that even her employers never imagined would see coming.  When her father passed away 3 years ago- Dimitra stated it felt as though time had stopped.  Even though the experience was traumatic- Dimitra was comforted to know that her father passed away peacefully.  He was no longer in pain, suffered no more, and surprisingly, Dimitra felt a sense of calmness and solace; despite the sadness and grief that followed his death.  To her surprise, Dimitra processed the reality of her father passing away as a natural occurrence.  It wasn’t as frightening as she thought it would be.

Dimitra believed the funeral arrangements were taken care of professionally and efficiently- and realised, based on the sudden experience- that she too had the compassion, empathy and professionalism to be a Funeral Arranger.  She also understood how important it was to ensure the dignified farewell of her father- was a memorable one.  A thought that stayed with her, in the back of her mind for three years onwards.  Life changed- for the entire family- a different perspective and value for life shifted.  Hence in 2019, three years after her father passed away- Dimitra’s sea change would come to fruition- when she applied for the Funeral Arranger’s role, as advertised with Acropolis Funeral Services.  Soon after, Dimitra walked through the doors of the business in Earlwood, interviewed well, was offered the role, and in no time at all; became Acropolis Funeral Service’s newest employee.  Fate as it would be, the rest is history, a new career was born.  A highly skilled, experienced and impeccably presented Funeral Arranger, Dimitra brings a wealth of knowledge, fresh ideas and commitment to her role.

Based on her acquired, professionally developed customer service skills and empathy- Dimitra has the proven ability to engage effectively and professionally with bereaved families during arrangements.  She has perfectly fallen into this role and has become a loved team member at Acropolis, proudly representing the brand.  A new journey has begun for Dimitra, a journey where she professionally accommodates the needs of the bereaved families she serves.  Dimitra works exceptionally well, either in a team environment, or working one on one- with families she serves.  A compassionate woman- an excellent listener that loves her role, and feels it’s the best career change she has accepted to date.  She firmly wanted to transition into a reputable company, a business whose brand was second to none.  It was imperative for Dimitra to work for the best, and personally and professionally grow within the business.  In her spare time, Dimitra loves to read, nature, and relaxing strolls along the beach.  When asked if she misses the airport- Dimitra stated no.  She said that it was a pleasure of an experience, an incredible journey- however it was time to move on.  Dimitra never imagined that this career change would be so fulfilling and rewarding.  Now, Dimitra is busy with her new career; in the funeral industry- accommodating the needs of those grieving.  A different, yet fulfilling  career change, but one that grants great satisfaction to Dimitra- Acropolis Funeral Services’ newest employee. 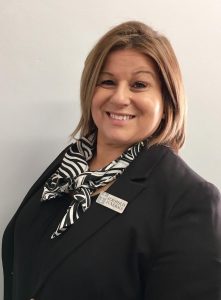 One Reply to “Spotlight on Staff- Introducing Dimitra Alexakis”