There are many perfect scenarios; for many, it’s lazy days, relaxing by the beach.  For others it is watching endless movies- or reading the latest best-selling books at hand.  Perhaps listening to music, the gathering with friends on a dance floor?  For Perry Konstantopoulos, of Acropolis Funeral Services- his perfect scenario is enjoying a barbeque.  A confessed connoisseur, in being the king of cooking the best Rib Eye steak in town.  Firstly, perfectly marinated by his wife Eunice- and then Perry executes his skills and sublimity- in producing the tastiest, juiciest – and tender steak imaginable, in 18 minutes to be exact.  Furthermore, Perry’s idyllic scenario is being accompanied by a gathering of family and friends- around the barbeque– enjoying the company of the people,  that mean the most to him and his wife.

He’s a keen fisherman, but during his interview- Perry would not confess of his secretive fishing spots- that have never let him down… he states.  His favourite movie is 300- the fictional retelling of the Battle of Thermopylae, in 480 B.C- during the war between Greece and Persia.  Driving and road trips are additional passions of Perry- and his wife who loves them equally.  They’re organising a proposed return road trip from Sydney to Noosa, Queensland, just shy of almost 2,500 kilometres.  On the cards also, is a proposed summer holiday, for rest and relaxation, on the other side of the world- to visit Greece- Perry’s parents’ place of birth, and Portugal, being Eunice’s country of birth.

For almost a decade, Perry has called Acropolis Funeral Services home- regarding a career that enables him to engage in many facets and operations of the business.  He was hired, based on his qualifications and experiences, from a resume with invaluable specifics that would allow him to effortlessly engage within the funeral home.  Prior to this, Perry worked in warehouse operations and management all his life.  Accustomed to managing up to 50 people, and working in busy nonstop environments with trucks, fork lifts, delivery staff, pallets of stock- and merchandise, the list is endless, Perry has the proven ability to multi task and accomplish outcomes as was expected, within his prior roles and industries.

From working directly with teams- as a Funeral Director, Perry also effortlessly works in isolation, when caring for loved ones- within the Mortuary facility at Acropolis Funeral Services.  He’s well known, has served countless families directly and regularly drives the hearse, conducts viewings and delivers excellence to the clients of the business.  A true asset, Perry serves respectfully and professionally at all times.

A role he loves, a business he is proud to be part of- an employee of Acropolis Funeral Services; that is appreciated by his peers.  He has accomplished a great deal professionally, it’s determined that he loves to barbeque meat.  He equally loves driving with a passion- but his greatest love of 21 years is golf.  Perry admits that he loves to watch it, loves to play it, and loves the joy and satisfaction that golf brings him, every time.  A chance to enjoy a sport, exercise, and lavish the fresh air surrounding it.  Just as much as much he enjoys listening to music; especially the disco era of the 1980’s… 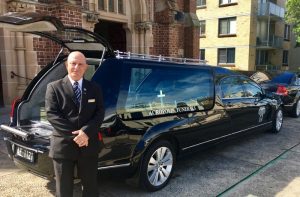