On the 23rd April, the Greek Orthodox Church celebrates the Feast Day of Ayios Georgios- Saint George.    Happy Name day- to all, celebrating today.  Did you know that Ayios Georgios is one of the greatest, most recognised and acknowledged saints across the Orthodox, Catholic, Anglican, Lutheran and Armeian churches?  Saint George is considered the protector of the Infantry and the soldiers in Greece. From all the stories and legends about Saint George that have passed into the folk tradition, the most impressive famous among generations is the one in which the Saint is killing the dragon for the sake of saving a princess.

The Feast day of Ayios Georgios changes every year, as celebrations can not coincide with mourning.  If Easter falls after the 23rd April, then Agios Georgios is celebrated on Easter Monday.  As Holy week and Lent are a time of mourning, Feast days and celebrations must occur afterwards.  Hundreds of thousands of people- are named after him.  People proudly named after him including George, Georgina, Gina and Georgia- celebrate this special occasion- whilst also celebrating the Resurrection of Christ at Easter. 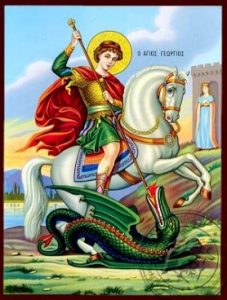