Embalming.  The process of preserving the human body after death, to delay decomposition- a craft and skill, that has been practiced for thousands of years.  There are 2 types of Embalming- being Arterial and Cavity.  Solutions are used to preserve bodies, which are commonly a mixture of chemicals including; Formaldehyde, Glutaraldehyde, Methanol, Ethanol and Phenol.  Water and colorants are used to reduce pallor, and restore the appearance of the skin.  The initial step in the embalming process is surgical, where bodily fluids are removed from the body, and are replaced with Formaldehyde-based chemicals.  The cosmetic step follows, in which facial features are set, and the body is prepared for viewing by styling the hair and applying makeup.

Behind the skill, there is an extraordinary and demanding amount of training and theoretical components.  To achieve competency, subjects and modules must be completed in Occupational Health and Safety, Bereavement Training, Law and Regulations, Policies and Procedures, Compulsory and Legal Mortuary Operations and Regulations, Anatomy and Physiology, Chemistry, Mathematics, Raising Arteries, Suturing, Navigating the Circulatory System and Post Mortem Embalming.  Furthermore, Autopsy and Non Autopsy Embalming, Post Mortem Physical and Chemical Changes, Knowledge of Diseases and Skin disorders etc., are essential components of this field.  Case studies and scenarios are part of the work load- prior to certification and qualifications acquired as an expert within this field.

Now that you’ve read these first 2 paragraphs, you’re probably thinking this is beyond comprehension, and more so, the questions; why would anybody like to do this line of work?  Furthermore you’re probably wandering why would they choose to pursue this career? You’ve probably even ascertained that the field of Embalming is confronting or too morbid to consider.  However, the answers to these questions are unbelievable.  In reference to the Embalmer in training at Acropolis Funeral Services; she’s female, aged 23 years...  She loves her career choice, is very passionate about her studies in Embalming, and has a balance regarding professional and personal life.  Death and dying does not scare her, nor does raising arteries and working with chemicals including Formaldehyde, Glutaraldehyde, Methanol, and Ethanol.  Yet she is genuinely horrified- at the thought of moths, and any insects with wings, especially butterflies.  When interviewed, it was stated that nothing is more petrifying for her than the flapping of moth wings…

Introducing Vivian Kiriazis; talented, prospering and developing into an industry leader of tomorrow.  A true inspirational, and refreshing role model to other young women.  Not only based on her career choice- but based on the circumstances behind her entry within the funeral industry, a unique set of circumstances to say the least.  Rather than starting off in retail, Viv, as she is affectionately known, found herself assisting her parents in their funeral home at the age of 17.  Rather than selling clothes- or serving customers, Viv found herself assisting in the Mortuary.  Once she completed her HSC, Viv commenced a Bachelor’s degree is Design.  However, once she identified that there was a missing niche, where her parents didn’t employ their own Embalmer, but an external contractor that would be hired as required.  Viv decided to defer and plunge herself into a complete career change, surrounding medical procedures and processes, as opposed to the flair and creativity behind the training of Graphic and Spatial Design.

Death- it’s the frowned upon topic and conversation; that many people become uncomfortable with- when they think about it.  A conversation that’s difficult to engage in, for most people.  Death.  The dark topic that scares people.  The unknown- that horrifies most of us.  Yet alone cemeteries, burials, cremations and coffins; morbid and horrific to say the least.  Death.  The final chapter of life, a natural occurrence that will happen to all of us.  It’s a given- yes, we will die, but until then, let’s not talk about it.  But for Vivian, she deals with death, grief and sorrowful situations every day.  She talks about death, particularly Embalming, being her chosen forte- her specialty, Vivian’s developing craft.  Success is a driver for Vivian, as is qualities such as determination, compassion, and the true desire to serve with professional and exceptional work ethos, and a passionate focus, on a developing future within the industry.  A shining role model that has proven- that any young woman can accomplish anything they set  their heart and mind to do.  She brilliantly fulfils the demanding expectations of her education, full time employment, whilst enjoying a relationship with her partner Billy.

In her spare time, of an evening and on weekends, away from the daily requirements of the funeral home, where Viv multitasks many facets of her role including Head of Mortuary Services, Administration, and as a Funeral Director’s Assistant, she loves socialising, shopping and spending time with family and invaluable friends.  Viv loves challenging puzzles, arts and crafts, and is talented in making jewellery.  She hates cooking, but loves salmon Sashimi.  Vivian loves travelling and has visited 28 countries across the Americas, Europe and Asia.  When asked what her aspirations are for the future- Viv stated that she wants to grow and prosper within the industry and become a business owner.  She wishes to broaden her horizons, by further volunteering, by when qualified, Vivian aspires to volunteer her services to the Kenyan International Emergency Services- an organisation that responds to emergency crisis in Australasia.  This includes mass deaths due to terrorism, and natural disasters such as tsunamis and earthquakes, that need to be urgently responded to.

Viv will have expertise once qualified, to attend to the retrieval of dead bodies from the scene/s, then embalm the identified deceased bodies- prior to them being Repatriated home to loved ones.  Viv stated that the funeral industry is changing, and she looks forward to being part of changes, on a promising and prosperous journey, whilst learning and adapting to the changes accordingly.  Vivian demonstrates a high level of maturity, beyond that of her peers.  Her strong business acumen and commitment to the business, evident.  The delivery of Vivian’s work is exceptional.  She is also a committed member of the Australian Institute of Embalming.  She is one of few in training in Australia- and once qualified, will be part of a specialised group of people Australia wide that are Embalmers.  Her determination to bring this reality to fruition is sublime.  An inspiring human being, with a pocket full of dreams; and based on her drive and focus, is determined to bring each and every one of these dreams to fruition.  The trainee Embalmer from Acropolis Funeral Services, one day, very soon- will be recognized as an outstanding leader of the industry, for sure.

But until then, between work shifts, training and learning, Viv will continue to watch and appreciate horror movies- especially the Saw franchise.  Viv will continue to collect pre loved antiques and oddities.  Viv will continue to learn- and research about sharks and flying; even though she is terrified of these subject matters.  An exciting graduation is around the corner.  Its significance containing great meaning.  A great moment of celebration and joy.  A brand new career opportunity will take off.  Kudos to Viv, for her gusto in making each and every dream of hers come true.  Dreams containing the greatest of colors and the zest for life.  A young lady with a heart of gold, who has given so much thus far- and promises to be an inspirational leader of the not too distant future… 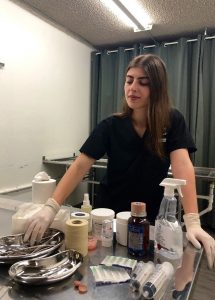 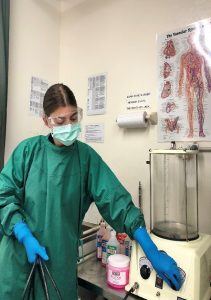