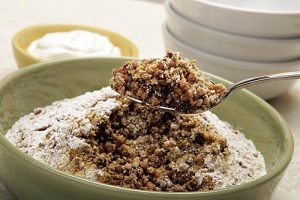 Koliva. For millions of Orthodox Christians across the world- we’ve all eaten them before, but often we wonder what the significance of it is? Why do we eat it? Why is it made? There is a great amount of fascinating information about Koliva.

The history of Koliva predates Christianity. It’s a dish made to commemorate the dead. Often, people will see Koliva offered during burials, at funerals, after Reverends offer oil, wine and sand to the deceased in the grave.

Koliva is blessed during memorial services- or Mnimosina as they are known in Greek. It is offered to family and friends customarily at the memorial services of 40 days, 3, 6, 9, 12 months, and on Saturday of Souls- Psihosavato.

Koliva is wheat based, boiled, cooled and dried well, and then mixed with fragrant spices, dried fruit, crushed nuts, and pressed into trays and laden with icing sugar. In fact there are many different recipes regarding making Koliva- and endless ways in which they are decorated and presented. There are many associations between the meaning of Koliva and the significance as to why we eat this particular dish after a death. If wheat is planted in the ground- as a seed, it will grow, emerge, and rise from the ground. Hence the symbolism of Christ’s resurrection, arising to eternal life after death. Furthermore- as the symbolism of we too rising from the dead, after we are buried in the ground. We rise, as the wheat grows and rises.